Kai is our amazing huge serval male. He came to us as a adult from a friend who was giving up breeding. He is a calm steady boy who is happy to be around us. Kai is a stunning stamp of male serval, big strong and robust. He isn't overly affectionate but is not at all aggressive.

Zazie is our stunning female serval girl. She is an amazing girl who arrived here as a kitten immediately purring and giving head butts. Zazie has a fabulous bond with us due to the amount of socialisation we gave her. She loves to sit on my shoulders and to rub herself on me, I'm all hers lol. She is a total sweetheart but still has her wild genes when she feels like it.

We are incredibly excited to announce the arrival of our first ever litter of Serval kittens born 25th March 2022. This is the first ever litter of Serval kittens to be born in Ireland (outside of a zoo). Servals are not domestic or hybrid cats, and they are not Savannah cats, Servals are a species of small African wild cats that were used to create the Savannah breed. Our cats and kittens were not taken from the wild but are a result of many years of captive breeding programs.
These kittens have been bottle raised and given a lot of attention and socialisation and they are super friendly and affectionate. New owners will need to keep up with the socialisation for the first few months. They are now weaned onto solid food and are completely litter trained. They cannot be allowed to free roam but can be harness trained. A outside enclosure for safe outdoor play would be a great advantage. They require a completely raw and whole prey diet, day old chicks, chicken portions, whole quail, prawns/fish. They cannot eat canned, pouches or dried food. They will go to new homes at the appropriate age to be well socialised and bond with new families.
Available as a very special pets or for Savannah breeding program. P.O.A.

Deposits can be taken for future litters. 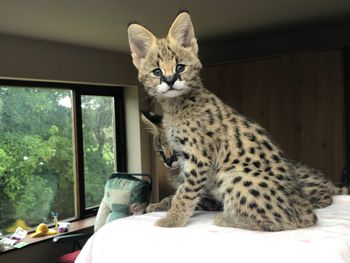 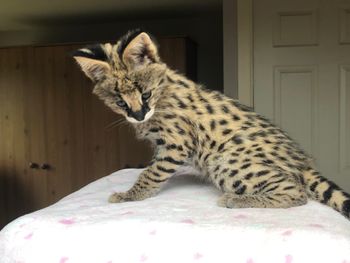 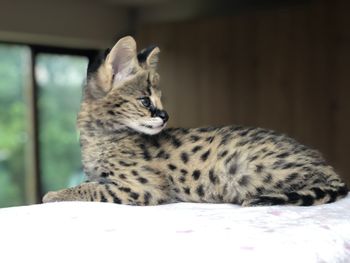 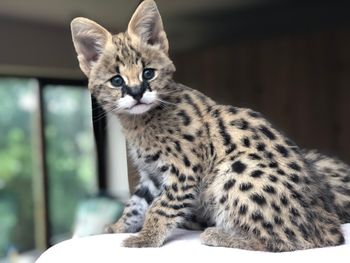 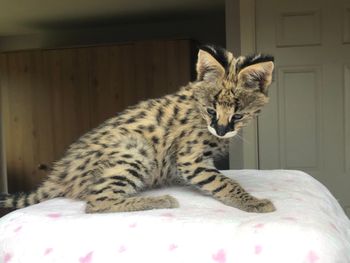 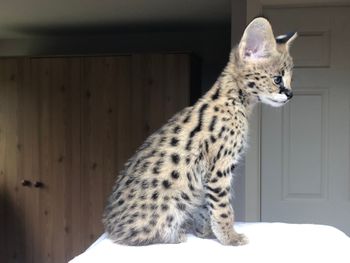 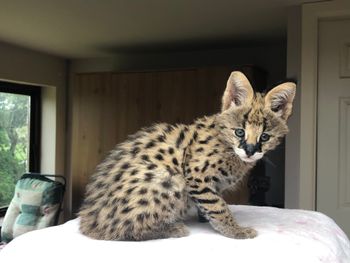 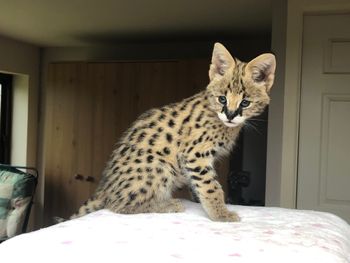 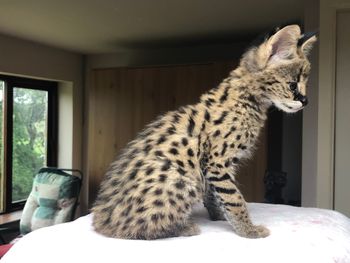 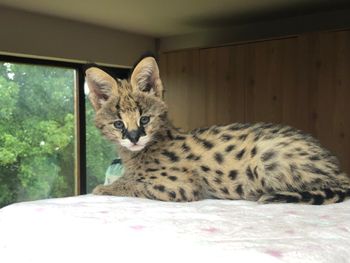 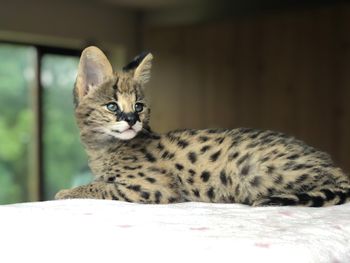 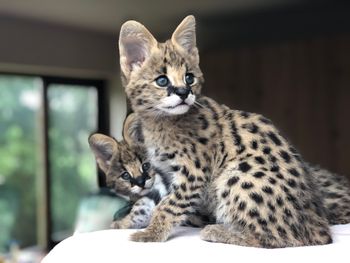 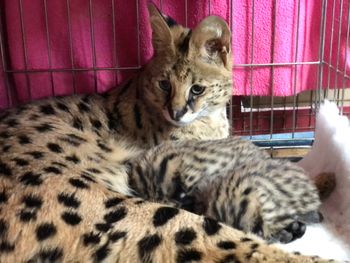 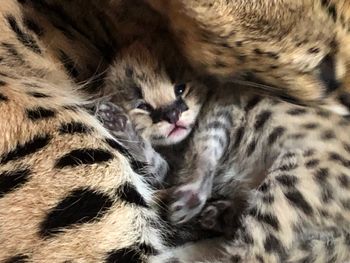 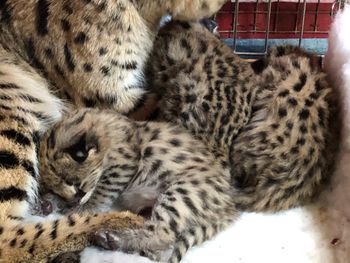 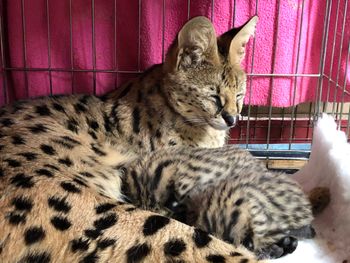 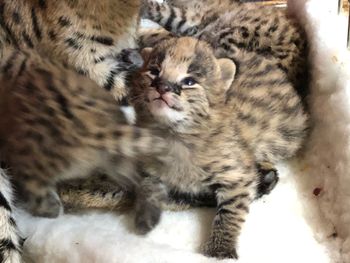 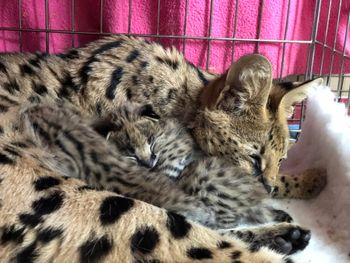 The Savannah Cat has been recognized as a pedigree breed by TICA since 1994. It was originally created by the crossing of the wild African Serval and a domestic cat. Those first matings were called F1 hybrid Savannahs in the cat world. F1 Savannah hybrid cats were quite similar to Servals and would retain a lot of the wild nature. They would generally inherit the large Serval ears, being slightly smaller in size with a beautifully spotted coat. In the early days because of the random factors in hybrid savannah genetics, there would be significant variations in the size of a hybrid Savannah cat, even in the same litter. Also the coat of a hybrid Savannah depended a lot on the breed used for the domestic cross. They could have some form of dark spotting on a lighter coat and many breeders employed wild looking spotted breeds such as the Bengal and Egyptian Mau for the cross to help preserve these markings in later generations. The hybridized breed of cat's appearance can vary far more than cat owners may be used too. It is the ultimate goal when creating any new breed to have consistency in size, looks and personality and this can take a few generations to achieve. The modern day Savannah has now developed into a pedigree breed and when it is a pure bred savannah to savannah mating the cat will have more consistency. SBT savannahs make fabulous family pets with a dog like personality. A Savannah cat is considered to be purebred (SBT) at F4 generation and later. Savannah cats are considered by some to be one of the larger breeds of domesticated cats. The savannahs tall and slim build gives the appearance of greater size than their actual weight. Savannah cats will take an average of three years to reach their full size.
The International Cat Association (TICA) breed standard calls for brown spotted tabby (cool to warm brown, tan or gold with black or dark brown spots, silver spotted tabby (silver coat with black or dark grey spots), black (black with black spots), and black smoke (black tipped silver with black spots) only. In addition, the Savannah can come in nonstandard variations such as the classic or marble patterns, snow coloration (point), and blue or other diluted colours derived from domestic sources of cat coat genetics.
Savannah cats have a “wilder” look and movement than most other domestic cats. The domestic breeds that were used influenced appearance. The domestic out-crosses used to create the Savannah breed that were permissible in TICA were the Bengal, Egyptian Mau, the Ocicat, the Oriental Shorthair, and the Domestic Shorthair.
In addition, some Savannah breeders have in the past used "non-permissible" breeds or mixes such as Maine Coon cats (for size) for the domestic parentage. A Savannah's wild look is often due to the presence of many distinguishing Serval characteristics.
Most prominent of these include the various colour markings and tall erect ears. The bodies of Savannahs are long and leggy. When a Savannah is standing, their hind-end is often higher than their shoulders. The head is taller than wide, and they have a long slender neck. The backs of the ears have ocelli, a central light band bordered by black, dark grey or brown, giving an eye-like effect. The short tail has black rings, with a solid black tip.
The eyes are blue as a kitten and may be green, brown, gold or a blended shade as an adult. The eyes have a "boomerang" shape, with a slightly hooded brow to protect them from harsh sunlight. Black or dark "tear-streak" or "cheetah tear" markings run from the corner of the eyes down the sides of the nose to the whiskers, much like that of a cheetah. These tear marks also help reduce glare from sunlight, which aids the Savannah's vision during hunting.

Savannah cats tend to become larger than the average breed. But in the early days of the Savannah, references were often made as to the enormous size of this breed. That aspect was over-emphasized, possibly because the first Savannahs by definition belonged to earlier generations. These tend to be larger than their counterparts of later generations. But even the adult size of an F1 or F2 Savannah can vary, and size is not considered the most important quality in Savannahs.

Because of this historical exaggeration, many prospective Savannah-owners will even to this day inquire about the eventual size of the kitten they are about to buy. Although it will almost certainly be huge in personality, no breeder should give you any guarantee as to the eventual size. If it does turn out to be a whopper, consider this a bonus if you like. If not, you still have the cutest cat with a great personality!

If you encounter a breeder who states that his/her kitten is guaranteed to become a huge adult, ask for confirmation in writing! Through experience with certain bloodlines they may be able to make a guess. But even the biggest kitten in a litter may not carry that qualification any more as an adult. And a runt may possibly even surpass it in size.

Even the size of the respective parents is not a reliable guide as to the size of the offspring. If anything, former produce of the same pairing may give you a hint as to what to expect with regard to size. But even this would be a guess, albeit a more educated one. In conclusion we can never give you any guarantee as to the eventual size of our kittens.

An F1 hybrid cat will have at least one unknown or unregistered parent- that is, a serval as a father and therefore 50% wild blood.

An F2 hybrid cat will have a serval grandfather and be 25% wild blood.

SB - The cat has no cats that are unknown or that descend from another breed or breeding groups in its last three generations of it's pedigree.

2. Codes – the following codes are featured in third place when labeling the cat

T: Traditional: Pairings only with Savannah cats over the last three generations

P: Permissible: Crosses outside of the breed permitted by the breeding program designed for the breeding (note: previously permitted pairings no longer exist today, when strictly Savannah x Savannah pairings are permitted)

S: Outcross pairings with other species than Felis cats (Felis domesticus). These pairings are used in foundation breeding programs but are non-permitted pairings by definition. These include pairings with the African serval. That is why all Savannah cats of the first to third generations have an ‘S’ in the third place

01: The cat has at least one unknown or unregistered parent

02: The cat has at least one unknown or unregistered grandparent

03: The cat has at least one unknown or unregistered great-grandparent

AO: This cat is the product of two cats of different breeds

BO: The cat has at least one grandparent with another breed

CO: The cat has at least one great-grandparent with another breed

Example: C3S: Third-generation Savannah cat. C: One great-grandparent is not a Savannah cat. S: An outcross pairing with a serval

F1 and F2 are classed as hybrid cats and as wild-cats you need to have permission to keep them. For F3 and later generations there are no legal regulations. SBT (F4 onwards) Savannahs are classed as purebreed Savannah cats and are the ultimate goal of Savannah breeding. They are much more homogeneous in type than earlier generations and at least four generations removed from the serval.

Savannah cats are expensive for a number of reasons, starting with how difficult it is to produce a foundation Savannah (F1). Breeding a wild cat, in this case the African Serval to a domestic cat is not easy. Not all serval’s will mate with a domestic cat, and not many domestic cats can successfully carry a F1 litter. The gestation period of the serval and the domestic cat are also slightly different. When breedings are successful litter sizes are generally small in numbers. This is why F1’s are so rare and very expensive.

F4 are SBT (stud book tradition) and regarded as full Savannah. These can been taken to cat exhibitions. Males are still infertile and females highly sort after for breeding so their prices are still high. F5 males are the first generation to be considered fertile but can still have low fertility.

*It is recognised that 95% of males F4 and under are infertile and there for not suitable to keep as studs.

* Please note that Sunstorm no longer breed Savannahs and will only breed purebred African Servals in future.